On Sunday 25th August, a group of hard-core outdoor professionals from Mill on the Brue headed to north Wales to climb, walk, explore and eat breakfast at the pinnacle café.
We all arrived on the Sunday evening after a very long drive to a very pleasant bunkhouse. There were showers, mattresses and even carpet. (Something the owner was keen for us to appreciate!) We got settled, cooked a dinner for champions and then got some sleep ready for a full day of fun – working at Mill on the Brue you are reminded every week of how important sleep is when you’re doing activities so we heeded the advice and got to bed.
In the morning we devoured breakfast at the pinnacle before Tom and Vicky headed off to get some single pitching in their logbooks for their SPA while the majority of us headed to little Tryfan for a day of Multi-pitch climbing. It was the first Multi pitching experience for some while others had to remind themselves what climbing was all about. We got in a few beautiful routes on a stunning piece of rock before heading around the corner (the massive, boggy corner with boulders and holes and undergrowth) until we reached Milestone buttress. Mike and Ciaran soldiered up one route and Tom dragged Fiona up another while Grace and I went through some rigging technique. To finish up we went for a pub dinner to plot the day ahead before muddling through a few card games and bed.
Day 2 was very mixed. The cloudy weather upset some plans but a good day was still had by all. Ciaran and Jess went to explore the Glyders, Mike and Tom flew around the Snowdon Horse-shoe and the rest of us attempted to find a tiny crag in the middle of the welsh countryside. Unfortunately this didn’t go to plan and we ended up at a little crag opposite Lake Plas-y. The weather cleared though and the views were superb so we made our peace with the big diversion and got on with some climbing. Tom and Mike joined us and by the time evening fell; Tom had invented a new climbing move – the whale! Grace fell in love with a chimney and provided guided tours for the rest of the day, I found a new love for my camera and everyone had a nice chilled afternoon. When we got back to the bunkhouse Ciaran and I had a cook off (I think it was a draw) and then we had the great idea of heading up Snowdon for an evening walk (because that’s the type of hard-core outdoor instructors we are!). The weather again had other plans and as the mists rolled through the valley we admitted defeat and headed to the pub for pudding instead. 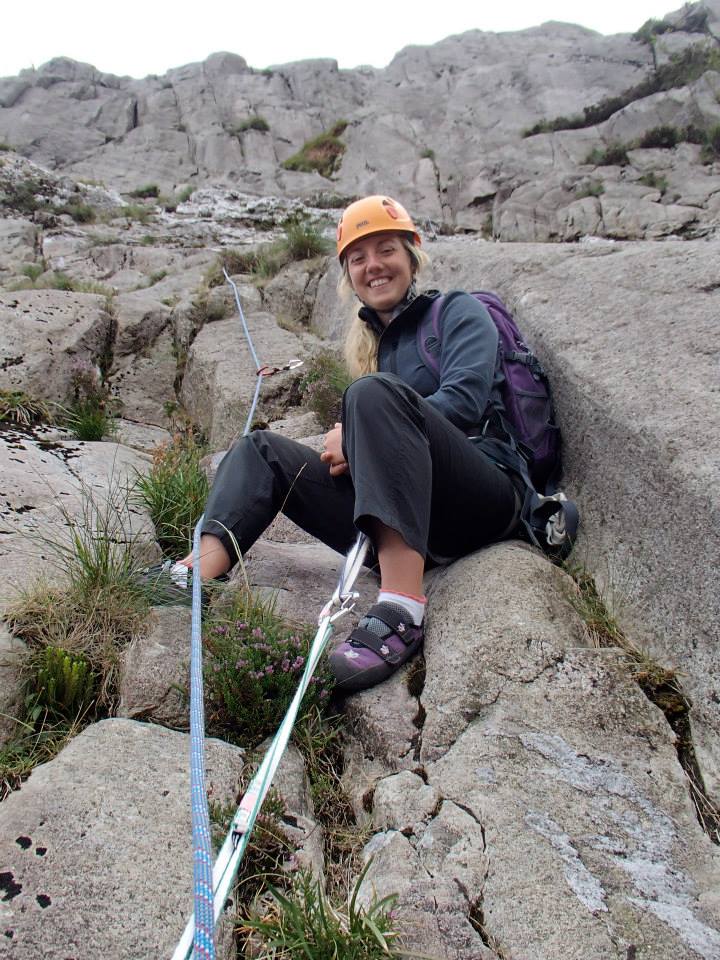 Day 3 was a team effort only missed by Vicky and Tom as they continued their hunt for single pitch climbs in an area of huge mountains. The rest of us headed to Id wall slabs; a stunning slab of rock over looking the valley and it’s very own lake. What’s more, the weather was beautiful again! We split into teams, Mike and Tom opted for the harder routes, Jess and Ciaran opted for a classic for Jess’s first multi pitch (no mean feat for someone that doesn’t like heights!) and finally Grace, Fiona and myself headed up another classic at a leisurely pace. Mike and Tom were unstoppable in their quest for climbs and put the rest of us to shame as they managed to do about 4…. Compared to the rest of our 1. At nearly 150meters high though and with a route down far more terrifying than the route up they did take some time! Despite the treacherous return to ground level, people were buzzing with the beauty of wales, the quality of the rock (something Somerset struggles to provide) and it was agreed that it was a great way to finish off the action part of the trip.

Thursday was a more sedate affair with everyone heading home or trying to squeeze in a little climb before shooting off. All in all though, the trip was a great success, igniting a passion and love for the outdoors in some of the less experienced in the group while for the more seasoned amongst us, it re-affirmed why we work in the wonderful outdoors industry.